Competitions as from 2nd January 2021

At weekends, Sam will be running competitions both days which will be open to all members. There will be two separate competitions for the two different courses.

This weekend, if we manage to open, will be a Better Ball Stableford. Normal £5 entry with 2’s pool and prizes.

The Sunday Winter League has been suspended until the next Government announcement on January 13th.

Depending on how things work out over the next week Sam will look at putting on some midweek competitions on as well.

Also if anyone has any suggestions in these strange times then please let Sam know. We are having to change things daily and trying to please as many people as possible.

If you need clarification please just get in touch or call the Pro shop.

Finally (well almost!) the last major of the year was played yesterday, Saturday 17th October. There was a tie for 1st place between Josh Bannister and Mike Leddy both with net 66 with Rob Edwards third on 67. Since the Hibbert is a major it cannot be decided on a card play off so Josh and Mike will have to go head to head to decide who lifts the trophy. Well played to both and good luck in the play off!

Following their tie for first place on the 22nd August Kieran Sharp, Sean Moore and Graham Nevett set off to do battle for the trophy. After 15 holes Kieran couldn’t be caught and so won hisfirst major as a member at NMGC. Congratulations to Kieran and to Sean and Graham.

Congratulations to Mark Hadfield who won this year’s Rigby Trophy with 39 points one point ahead of Carl Garside. 3rd place went to  Gary Yates on a card play off with three others who all finished on 37

Congratulations to Barry Lawson winner of this year’s Club Trophy by one! there were some excellent scores with Mitchell Malthouse winning round 1 with a superb 64 whilst Josh Webb scored an incredible 59 to win round 2. However, Barry’s  steady play with a 70 plus a 66 gave him 136 one ahead of Mitch Malthouse (64+73) with Mr President, Jez Unsworth 3rd with 139 (71+68)

Played over two days, this year’s Shaw Marsh Trophy couldn’t have been closer. Day one saw Alex MacKenzie take a narrow lead with 65 just one shot ahead of Joe Stockton with Joshua Westmerland and Jack Marshall one shot behind with 67.

On Sunday both Jack and Josh scored 68 along with John Coleman and Neil Hyde so overall Jack and Josh both finished with 135 one shot ahead of Alex. A play off will therefore be necessary to determine this year’s Shaw Marsh Trophy winner.

Well done to everyone who competed in the first major the year. The best score was by Daniel Tweedie but since he is ineligible to win a board comp as a result of not being a full member, the trophy will be presented to the runner up on the day Josh Westmerland.

The Bogey competition is never an easy one so well done to all winners. As 3 players finished on the same score there will have to be a play off played to decide the winner. Also massive congratulations to Jon Kershaw for getting a hole in one on the 12th winning himself a Hugo Boss watch and £20 in credit.

1st Graham Nevett 4up
Sean Moore 4up
Kieran Sharp 4up

After lots of deadlines getting pushed back to the global pandemic Sam wasn’t going to throw the towel in and abandon winter league. On Sunday morning, last years winners, Steve Holmes Kirkham and Graham Nevett took on Mick Currie and steady Bob Gaskill in the winter league final. Played in true winter league clothing (shorts & a shirt ;)) last years champions managed to retain the trophy and claim the top spot yet again.

Congratulations to Mark who once again gets his name on the Honours board!

Congratulations to Mikey who won this year’s Players prize with after a great final round  which saw him achieve an excellent aggregate score of 265 which was enough to put him comfortably in the front of 2nd place, Andy Rogers, who scored 268 and Tony Jennison also 268. Well done to everyone!

Huge congratulations to Jack Marshall who retained the Club Trophy this weekend. Played as a 36 hole medal, conditions this year were not easy. However, there were some excellent scores. Overall gross winner was Keane Hyde with 69 + 69 giving a score of 138.
However, Jack won the competition overall with a nett score of 132 (66+66) with Keane second with 136 (68+68) and David Swindells third with 140 (66+74).

Well done to John Coleman winning this year’s Rigby trophy with an excellent 42 points. This is John’s first major competition win. Runner up was Allan Wells who was just one point behind with an impressive 41 whilst Paul Bowers came third with 40 points.

Whilst day 2 belonged to Simon Ignotus winning with a card play off with 67 the overall winner of this year’s Shaw Marsh Trophy is Chris Wood who added to his gross 66 on day 1 with a nett 70 on day two to give him a total of 134 and a win by two shots from Simon with Mike Leddy in 3rd on 136.

This par bogey competition is never an easy one to win. However, Peter Coull (3up) came first just ahead of Ollie France (also 3 up) with Sean Moore a close third. Well done to everyone!

Played this year at Cavendish Golf Club, Buxton, members enjoyed an excellent course and a great day out. Winners were Steve and Gary Yates although there  was a near crisis on the last hole when Gary caught a flyer off the fairway and his ball landed on the sofa of the Steward’s living room! Fortunately, no one was hurt and it didn’t prevent the pair from winning with 37 points.

Congratulations to Jack Hulse winner of this year’s Bramhall Trophy with an excellent 47 points. Second place went to Kean Hyde with 42 whilst Dan Thomas came third with 41

Well done to Joe Bowers on winning this year’s Hibbert Cup with an excellent nett 63. The result couldn’t have been closer with Mark Brooks also finishing with 63 in second and Barry Lawson in third also with 63. Well done guys! 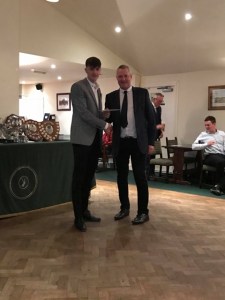 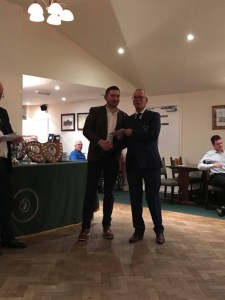 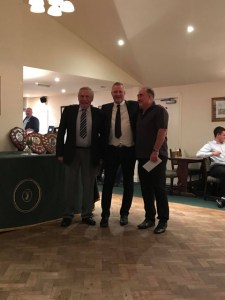 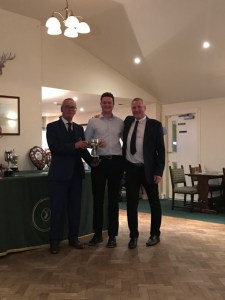 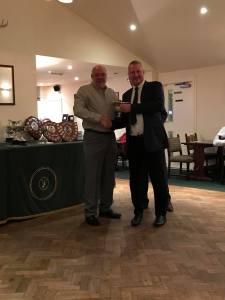 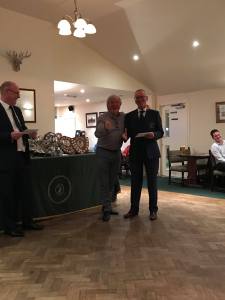